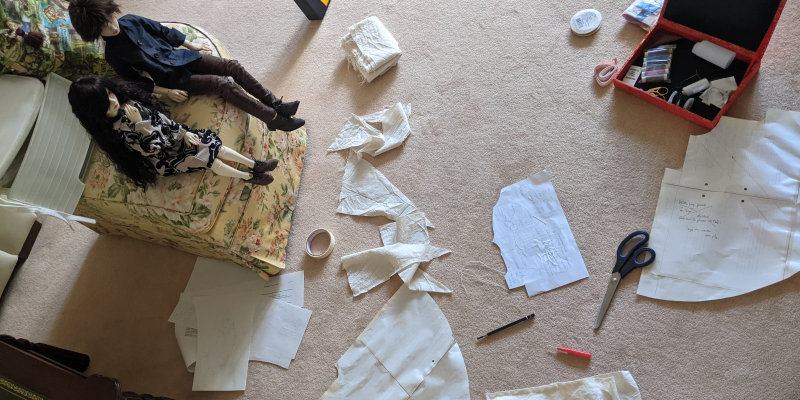 In which these dolls compel me to learn useful life skills so I can make stuff for them.

I started learning to sew for my gang a month ago.  In my early hobby days before I went on BJD hiatus in 2013, I wasn't interested at all in sewing - but I was younger and less confident back then.  Now, I'm much more interested and motivated to jump in and learn, and have the time, energy and money to do it.

Last time I sewed anything significant was in middle school for home economics; haven't found a reason to practice these skills until now.  Learning useful life skills and building character: That's what BJDs can do for you!

I started with hand sewing because that's the easiest way to jump in.

Project 1.  Cushions for the doll bench

First project was making cushions for the doll bench out of old pillowcases. Easy enough: got to practice cutting fabric, making stitches, finishing a simple project, and gauging how much time and effort it all takes.  I used back stitches to sew the cushion covers, and ladder seam stitch to close off the opening after filling them.  I will make a better set of cushions eventually (it'll be a good first project for machine sewing) but these will do for now. 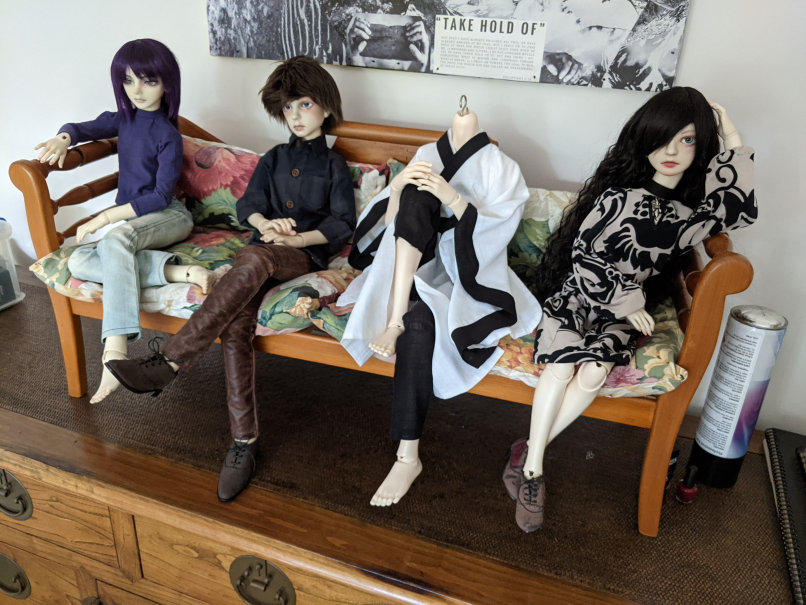 This was finished in early/mid December so Justinian still had his old faceup in the photo. And yes, that's a Headless Boy chilling there with the others. I've had this body since early December.  His head is currently on its way to me, so I'll have more to say about this fourth doll soon.

The gang may be all decked out in wonderful kimono but they're lacking in the modern casual wardrobe.  I made a large clothing/shoes order from LUTS during their 2022 Winter Event, and while waiting, decided to make a stab at making wide-leg pants for Syr.

I used a pattern from this Instagram account - I think it offers legitimately free patterns.  Jumped in the deep end with measuring dimensions and drawing out a paper pattern.  Sewing math isn't hard for me and I find the calculations (mostly ratios) an interesting challenge. I think I might enjoy drafting and creating my own patterns.

I decided to start sewing in muslin to practice connecting all the pieces and what stitches to use -- and I'm glad I did, because I was awfully confused at first.  (How does everything connect? how can this 2d pattern possibly end up looking like finished pants?)  But it made more sense as I went.  I didn't like the shape of the original pant legs, so I adjusted the pattern by cutting the fabric to size and redrawing the paper version. 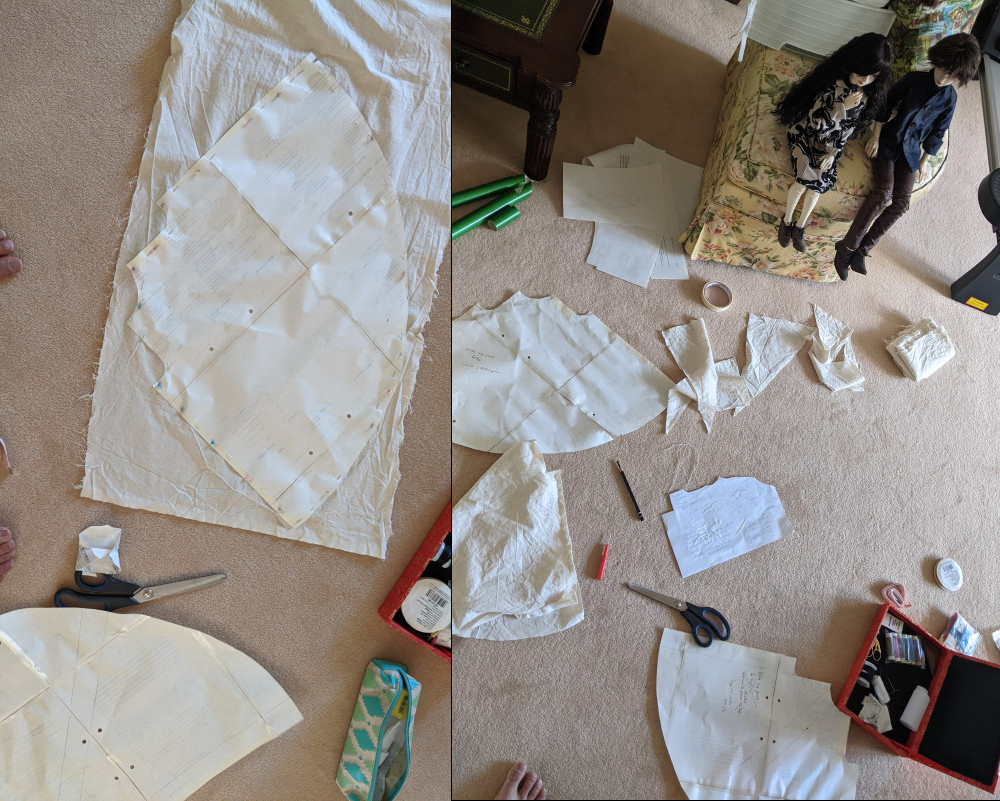 The chaos!  Halcyon and Justinian watch me piss and moan and flail.

Final garment is made of cotton; I added snaps to the fly although the fabric overlap wasn't great.  Seams were sewed with back stitch, and I got to practice various hemming stitches. 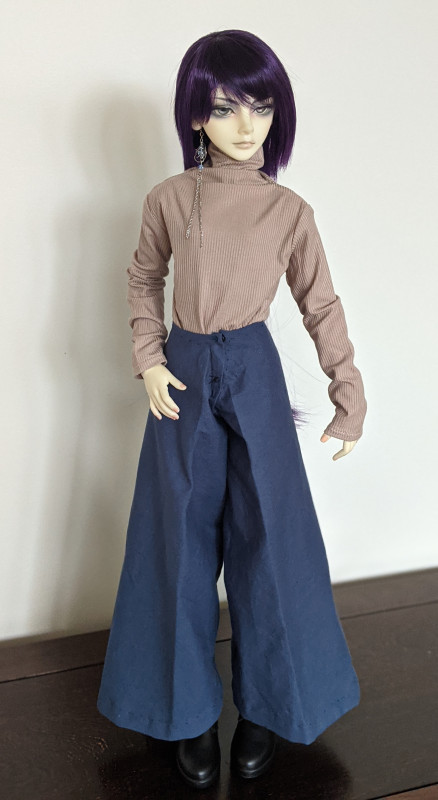 I finished this on Christmas day, so Syr got a Christmas present!  She wore them to this meetup.  The pants were a great learning experience, but I'd like to remake them one day.

After making Syr's pants I felt it was time to tackle a yukata for Halcyon.  Hat has a great yukata pattern on her website: it calculates the fabric measurements and has instructions and pictures for this newbie to follow.  Thanks, hat!

I also started with a muslin mockup, and got to test out what stitches to use where.  Final garment is made of cotton that I found at a thrift store -- old fabric, but its age gave it a nice drape.  Finishing the garment tired me out completely (so much hemming), so I stole an obi from a different handmade outfit because I wanted the project to be over and done.  I'm actually happy with how this yukata turned out, so I might keep it for Halcyon's wardrobe and make a new obi later on - something colourful to contrast with the muted yukata. 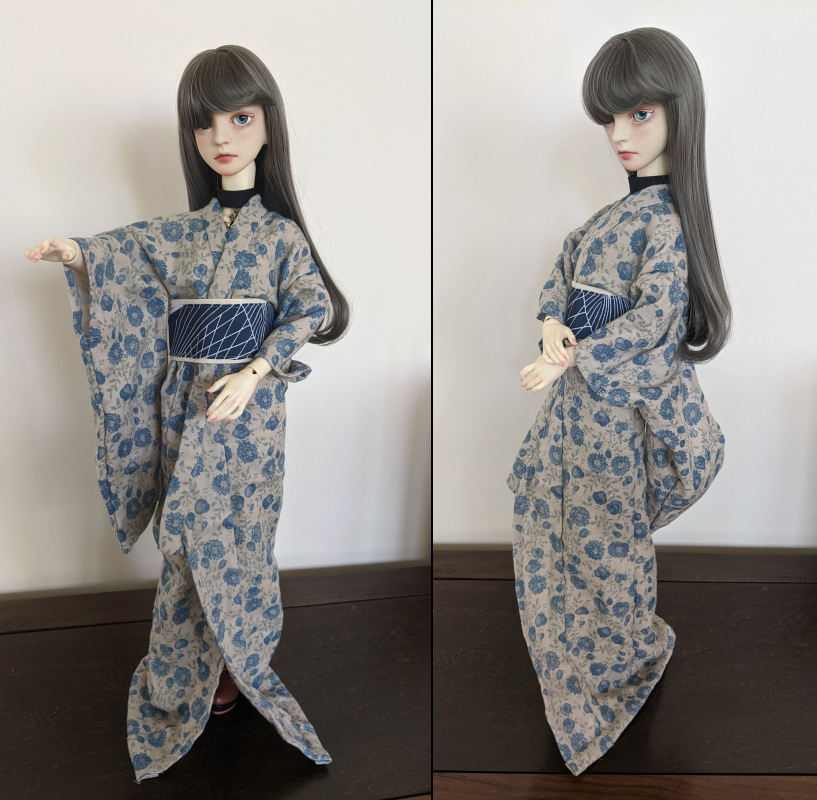 And yes, Halcyon is currently wearing a dark grey wig.  I'm unsure about it.  My original plan was to give her grey hair, but that wavy black wig looks so good on her that I might keep her in it.  And to think it was always meant to be a stopgap until this grey wig came.  Dolls sure know what they want...

My big LUTS clothing order came in a week ago, so Syr got her new pants, pictured below.  She fits nicely into SDF/SDF65 boy pants but, not surprisingly, the legs are too long.  I was fresh off Halcyon's yukata (so much hemming), so I used a slip stitch to hem the leg cuffs.  I think I did a tidy job, considering it was also my first experience sewing stretchy fabric.

This photo was from before I hemmed her pants, but look! — 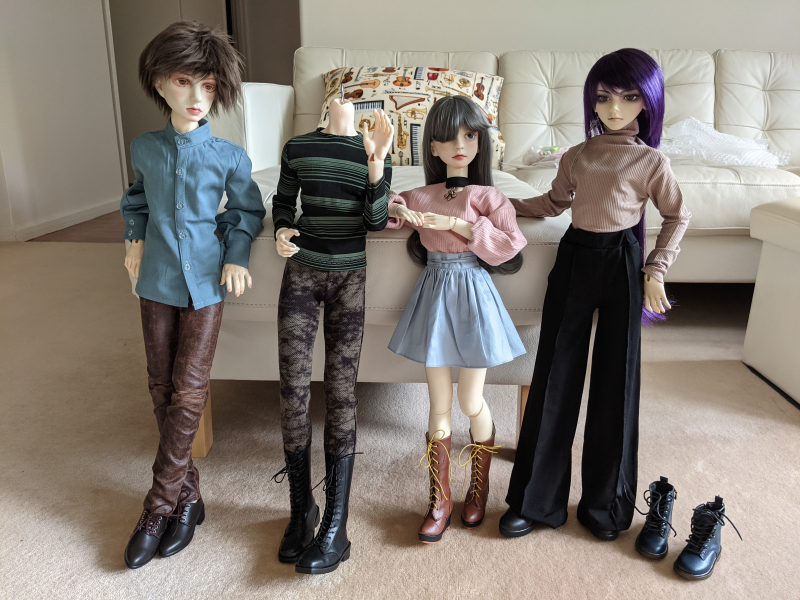 —New casual clothes for all!  Everyone finally has new shoes that aren't falling apart! AND the shoes fit their feet -- I'm very relieved about that.  Even Headless Boy snagged a pair: those boots turned out too big for everyone's feet except his.  But he's wearing old clothes, and will stay in them until his head comes and I can figure out what his style is.  I have some ideas already, but I won't be surprised if they get vetoed.

Why bother learning all of this?

So far, so good.  I have a much better idea of the whole sewing process and getting more comfortable with all the steps.  I don't think I'll keep the bench cushions and Syr's pants because they really are novice work, but I am happier with the quality of Halcyon's yukata.  So I feel like I'm making meaningful progress already.  Overall, I don't think I enjoy sewing as much as painting faceups, but I'm still interested and engaged enough to want to keep making clothes.

Next step is to jump onto the sewing machine. Hand-sewing basic stitches is excruciatingly dull work, and I can only be entertained so much by podcasts.  The sooner I learn machine sewing, the less risk of me abandoning the entire sewing endeavour out of sheer boredom.

And I have to say, this fabric-buying gremlin is very seductive.  Need to do something with this growing pile of fabrics...