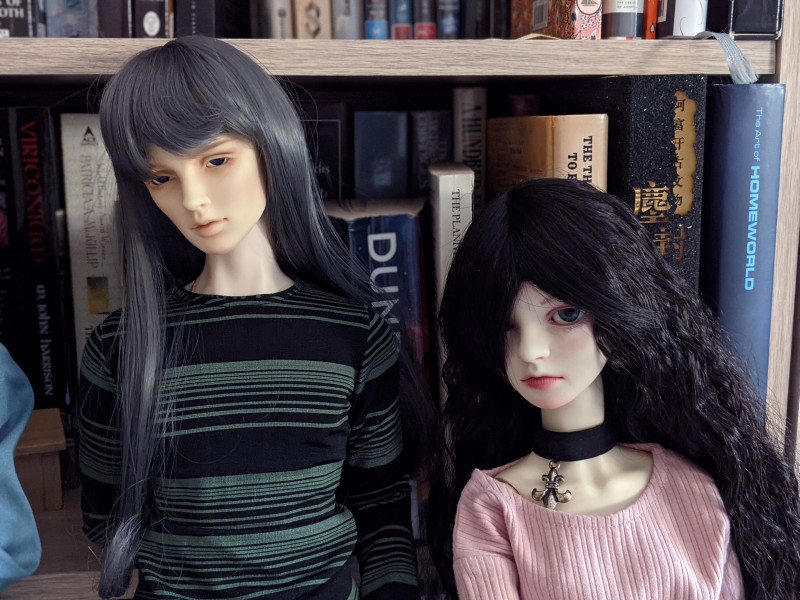 At last, I have a second boy home.  Vallant is Kanadoll Mars on Migidoll Style65 body.
Doll nudity in the post.  Also a ton of bloggy rambling.

His body was an opportunistic buy in December.  Migidoll had recently discontinued the Style65 ver.2 Guy body and was selling remainder stock at 40% discount.  My searches on DoA revealed that Kana's 'normal skin' matches Volks pureskin normal, and Migidoll meringue beige resin supposedly matched it too.  Someone had also hybrided Kanadoll Mars on the same body, and from their photos both resin match and proportions looked good.  So I ordered this body from Migidoll, who shipped it out 4 days later!

The box opening, back in early December. 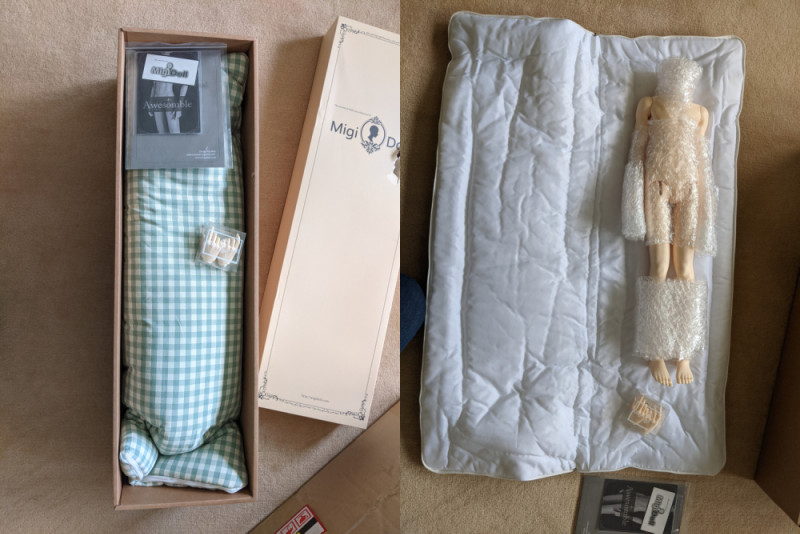 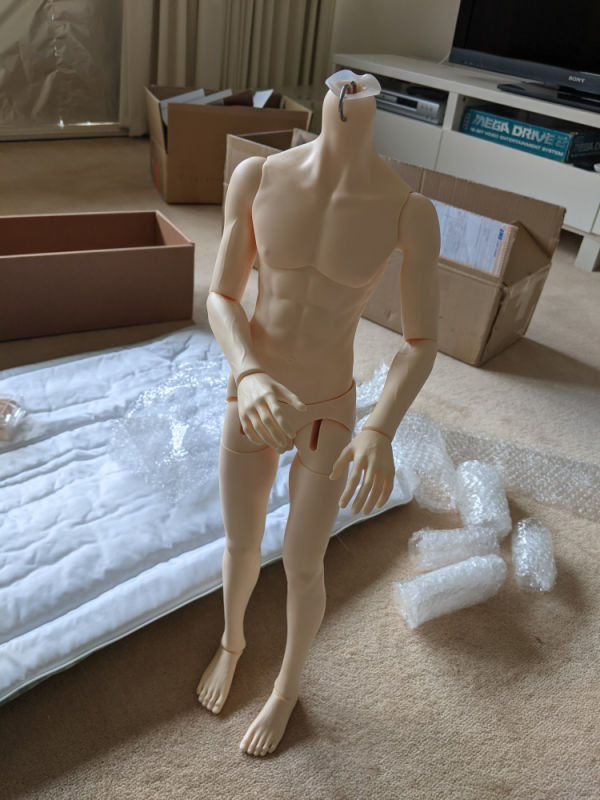 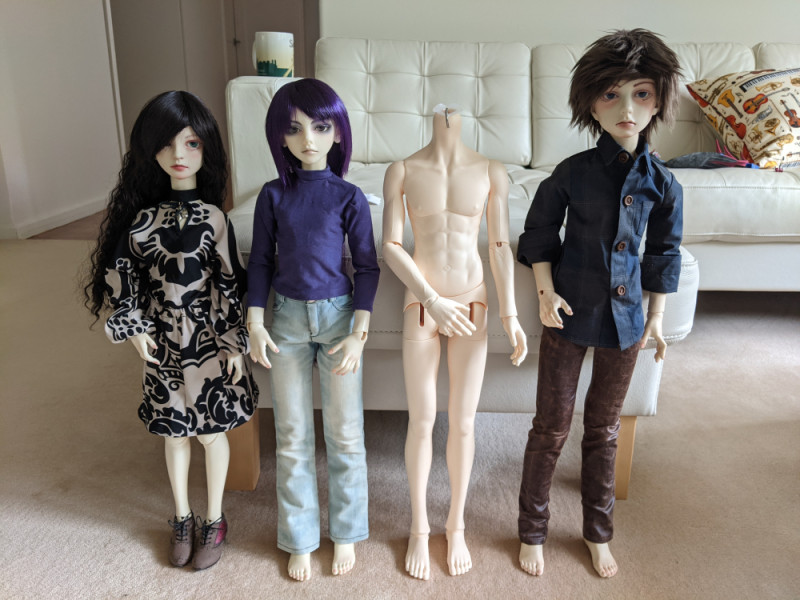 Headless Boy cooled his heels with the others for a month, until his head arrived a few days ago.

According to the Den of Angels wiki, Kana was originally involved with Rosen Lied, and she is currently involved with Petit Soiree.  She started sculpting heads under her own Kanadoll (Kana by Kana) label in 2014.  That was during my long hiatus, so her sculpts were all new to me.

Kanadoll Mars no.5 is a wonderful sculpt.  (Much more to say about him below.)  I don't know who painted his faceup: likely a Japanese artist, since I bought it off Yahoo!Japan Auctions. I like the subtle and elegant painting very much, and it's suitable for Vallant's character, so he will keep it. 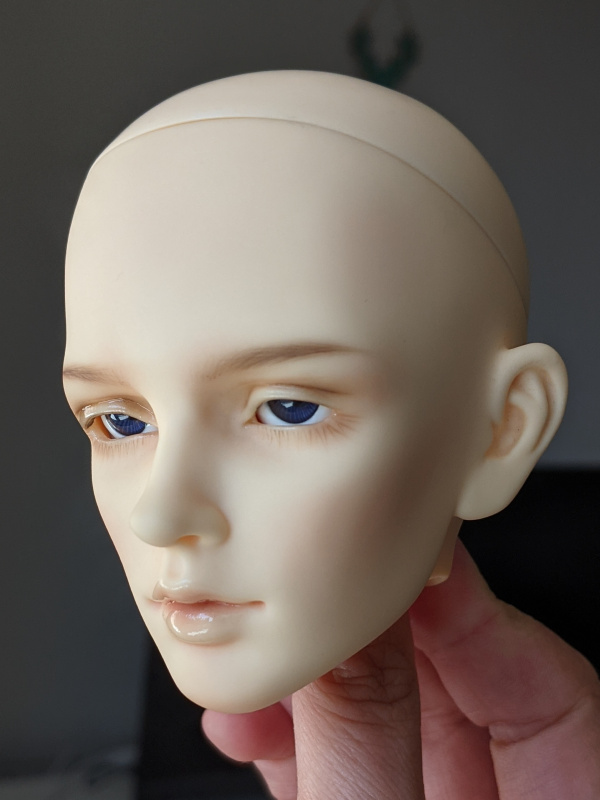 I'm also astonished at how small Mars' head is. I haven't owned a 8-9" head/14mm eyes doll for a long time -- not since my first ever BJD -- and my sense of doll proportions is completely conditioned to my crew who all have 9-10" heads/16mm eyes. I threw everything I had onto him: the only pair of 14mm eyes I own, and any of my oversized wigs that looked faintly appropriate.

Vallant: Um, thank you for the hair.
Halcyon: No -- thank YOU for taking this thing off my head.  You look much better in it. UwU 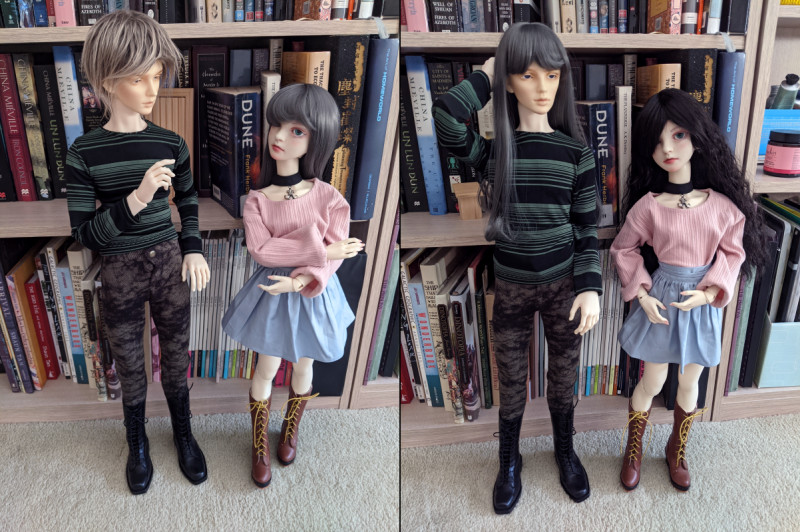 Proportion-wise, he looks slightly out of place amongst my crew, but it's not so drastic to be immersion-breaking. I'm confident I will get accustomed to it!  He doesn't quite resin match to the Migidoll body, and that body I will replace probably sooner rather than later.  Even more about that below. 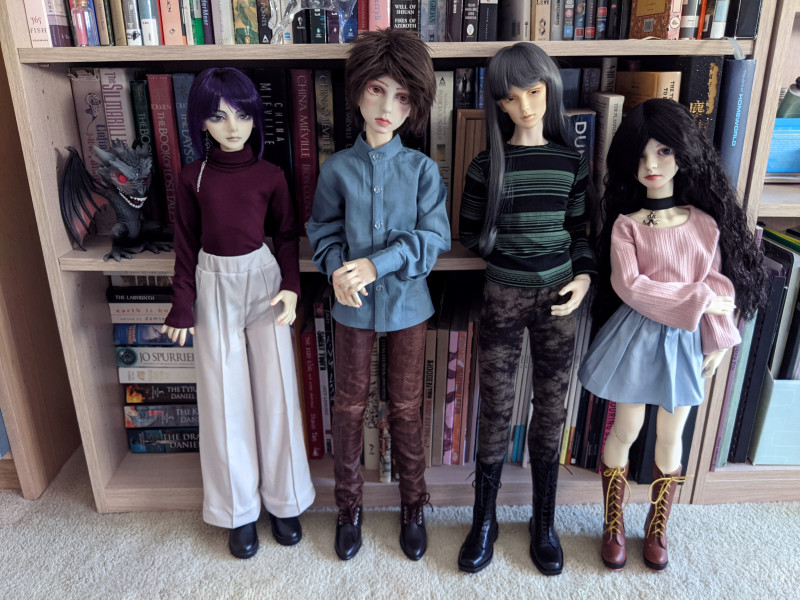 Welcome, Vallant. You're not looking anywhere like yourself yet, but I'm committed to the effort!

Now, for a whole lot of rambling.

I'd been interested in BJD boys practically from day I joined the hobby, but ran into a Goldilocks problem.  My first two boys were Dream of Doll Lahoo and Volks Kohya (in memoriam), and through them I discovered that I'm not fond of highly stylized, anime-esque boys in the mould of Cerberus Project/Fairyland, Dream of Doll, Angell Studio, and Crobidoll.  (Crobidoll Lance doesn't really count: I could only ever see a girl in that sculpt, albeit an androgynous one - and that's who Syr is.)  But I'm even less enthused by realistic, masculine men as trailblazed by Iplehouse and followed by Impldoll, Supiadoll, Sartoria J, and Granado.  On the realistic/stylized spectrum, I still prefer stylized.  The middle ground is the semi-realistic, somewhat androgynous style of Soom, Switch, Little Monica, Dollmore, and LUTS... but many of those sculpts looked either too girly or just nondescript, and not boy enough for my liking.

c. 2010. The only picture I have of Lahoo and Kohya together. Pretty boys, but too stylized for me.  Please pardon Kohya's misstyled fusion kimono/hanfu top: I was quite ignorant of proper East Asian dressing conventions back then. And to think this is my own culture... shame on me!

'Too hot', 'too cold'.  After I decided that Lahoo and Kohya were not to my taste and sold them, I struggled for a while to nail down what exactly I wanted in boys.  Then I discovered Dollstown, and found 'just right'.

I can't overstate how important Dollstown is to me.  They shaped many of my BJD preferences, the foremost being my taste in male sculpts.  I began paying attention to them around 2010-2011 after getting a 15year girl body for Syr.  At that time, An Jonghak had sculpted his first 1/3 boy body (the original 15year boy; it was completely revised in 2013 and is very different now) and two similar boy heads, Hue and Mui, to go with the body.  I strongly dislike open-mouthed sculpts so I was never interested in Hue, but Mui utterly arrested my attention.  He looked like no other male sculpt I'd seen previously: a somewhat 'Western' aesthetic, realistic but strongly idealised, still a bit stylized, and a boy - or more precisely, a youth.  This was exactly I was looking for in a male sculpt.

So I fell in love with Mui, and got him in 2011.  Since then, I've been comparing every male sculpt I see against Justinian.  Not much lives up to him or my tastes.  After I returned from hiatus and completed Halcyon (who was my first resin priority), I resumed my search for a second boy to add to the crew.

Kana's general aesthetic appeals to me, but Mars no.5 completely stood out from the others.  At last -- a male sculpt who measures up to the standard set by Justinian.  I could visualize them together and see Mars fitting in aesthetically with the others.  Furthermore, I already had an rough idea for Vallant's character, and when I looked at Mars I saw Vallant looking back. Kana premiered Mars in 2016, and maybe re-released him in 2019 (though I'm not sure).  Time to search for him on the secondhand market. 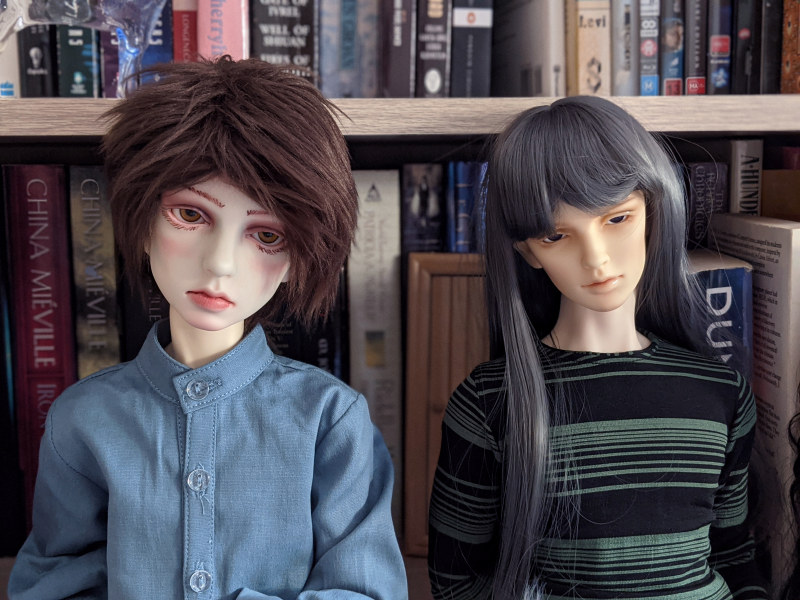 He proved somewhat elusive.  Kana's sculpts don't appear often on secondhand markets.  After about 1.5 months of posting WTBs and casting my search net further afield, I found a Mars in normal skintone on Yahoo!Japan Auctions.

Compared to Halcyon, who came together effortlessly, Vallant needs a lot of work before he'll look like himself.  Right now I have some green eyes coming for him; wigs will take longer, but I'm thinking pale -- white, light silver, or ice blond.  I don't have any of those colours to test against his skintone, so I might need to experiment a bit.  And expect to get vetoed, of course: these dolls know who they are and what they want.

I'm up for the challenge.  I now have a second boy, and I'm so happy that I could get him.  He was worth the search and the money.

Unfortunately, I am far from pleased with the Migidoll body.

The resin is good quality and the body's aesthetics is decent.  He's a bit broader in some dimensions than Justinian, and I like that distinction between both characters.

But all the flaws manifested when I started handling it right after box opening.  The most glaring issue was the design of the double joints. Both elbow and knee joints seemed to be cut out of the existing limb structure without any thought given to how the bent limbs looked aesthetically.  The joints might look flush with the body in neutral/static pose, but look unsightly when bent and locked.  The aesthetics would be tolerable if the engineering was good, but alas: the double joints are cut from the neutral limb in a way that gives them sharp corners and edges.  These edges nick the surrounding resin pieces and they don't move smoothly against each other.

The joint locking mechanism also needs two hands to lock and unlock.  Having done a lot of photoshoots, I pay attention to how smoothly I can handle and manipulate my dolls into poses. Anything that complicates the posing is a minus in my book: using two hands to move a joint is complicated.

I can't help but compare Vallant's body to Halcyon's.  Halcyon's body (Ariadoll 14year girl) is the first double-jointed one I've handled, and it has vastly superior design.  Thought was clearly given to the design and fit of the elbow and knee pieces: each is well shaped and moves smoothly against each other (so no nicking of resin parts), the joint locks have rounded edges while still doing their jobs effectively, and I can lock/unlock every limb with one hand.  Ariadoll also took care with aesthetics and I have no complaints with how the joints look when fully bent and locked. Compared to her, I find Vallant's body very disappointing.

I mean, look at these elbows. 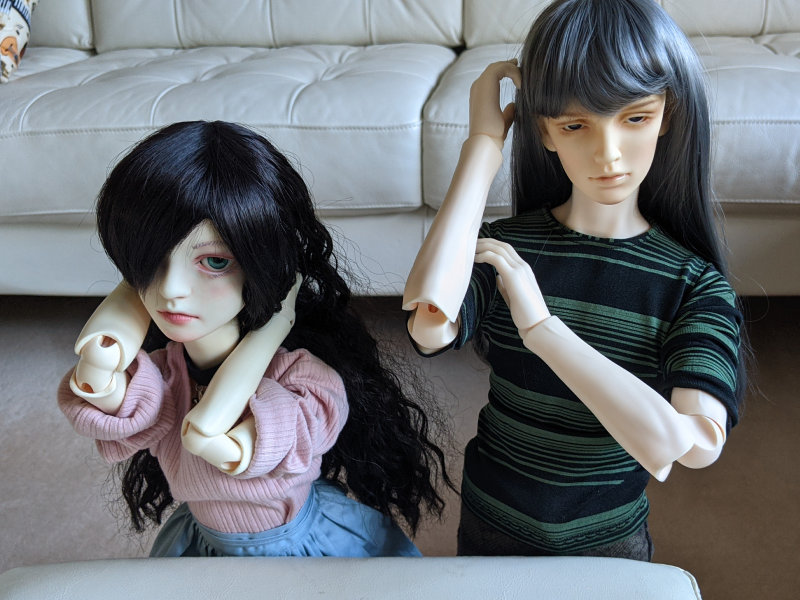 I had been vaguely aware of the discussion about what is important for double-jointed bodies, but didn't give it a lot of thought since Halcyon's body was such an excellent first experience.  I also got hooked in by Migidoll's sale and didn't really stop to research its joint quality... I've learned my lesson now!  But I'm glad I had this chance to handle good vs. bad double joints in person, and know what to look for now.  I always thought this Style65 ver.2 Guy body was being discontinued because Migidoll was leaving the 65cm boy space and focusing more on taller boys; perhaps a second reason is that its design is indeed inferior compared to many other doll bodies, and it doesn't sell well as a result.

I still decided to reserve judgment on the body until the Mars head came. If the resin colours matched, I might put up with the body. But they don't: in spite of what my hybriding research suggested, brand-new Migidoll meringue beige is pink-toned while 6-year-old Mars is yellow-toned. I suspect Migidoll's resin will mellow over time to become less pink, but this means I have no reason to keep it around.

First failure in resin matching.  This is what happens when I don't do my usual meticulous research!  But Syr and Halcyon have given me lots of good experience (both of them were much harder to hybrid than Vallant) and I'm confident that I can find a body that resin matches and has better joints.  Anything would be better, really!

If you made it through this entire blog post - thanks for reading! have some more photos of the crew. 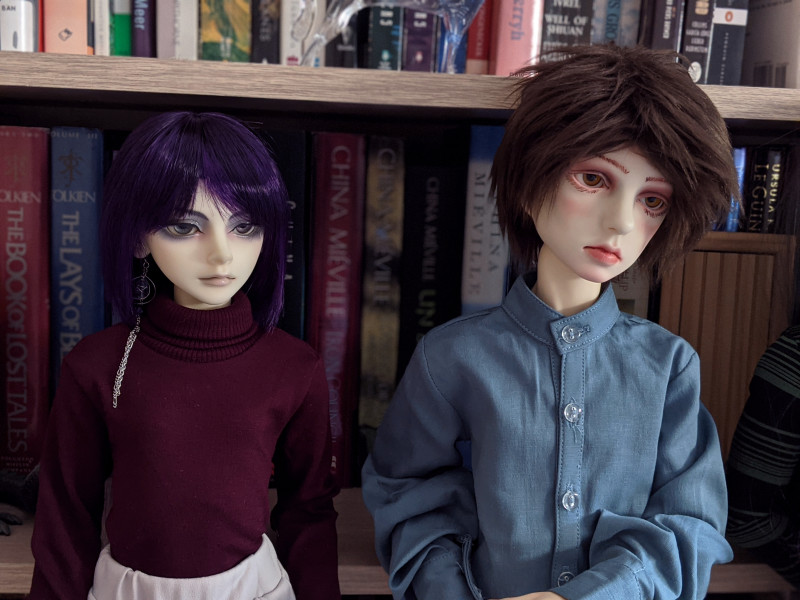