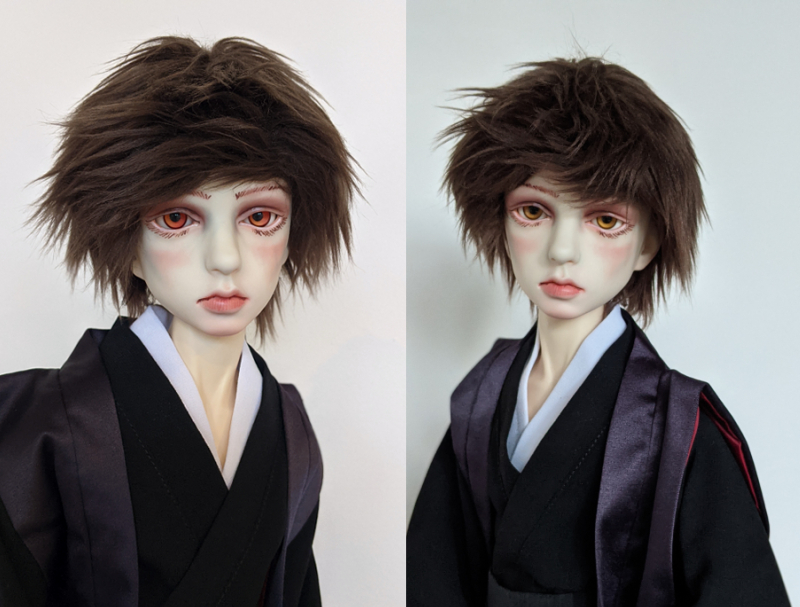 AKA: learning how to cooperate with a doll sculpt

My faceup practice has been on hold since November because I painted Halcyon and Justinian, and then ran out of spare resin.  (Hopefully not for long: I've already made a big order from LUTS during their Winter Event 2022, enough to receive a Winter Event head for free, which I will use for practice.)

I'm satisfied with Halcyon's faceup, but not with Justinian's.  The one I did in November was the best I could do at that time, and suited him somewhat, but there's a lot that I want to improve on.  Moreover, I recently received a critique about it from a non-doll IRL friend -- well-meaning but a bit artless and stinging -- and that aroused my dissatisfaction with my painting skills all over again.  So, against my better sense (because it's never a good time to revise a piece of art when you're annoyed and feeling a bit defensive), I sat down earlier this week to wipe and redo Justinian's face.

Also, I'd always imagined Justinian having orange eyes. So far, he'd been wearing a pair of blue eyes from Dollflower, which looked fabulous but wasn't the colour I'm going for.  I have a pair of orange eyes from Enchanted Doll, which were worn by a different doll in the past -- Alerion, my "former" Volks MSD girl ("former" because I still have her but am trying to sell her) looked wonderful in them.  But try as I may, I'd never been able to get Justinian to wear them: no matter which faceup he had, he always looked wrong with orange eyes.  My faceup painting skills can stand to improve, so this would be my last attempt to test those eyes again by painting him a fresh faceup.  If it failed, I'd concede defeat for good and just let him wear blue eyes. 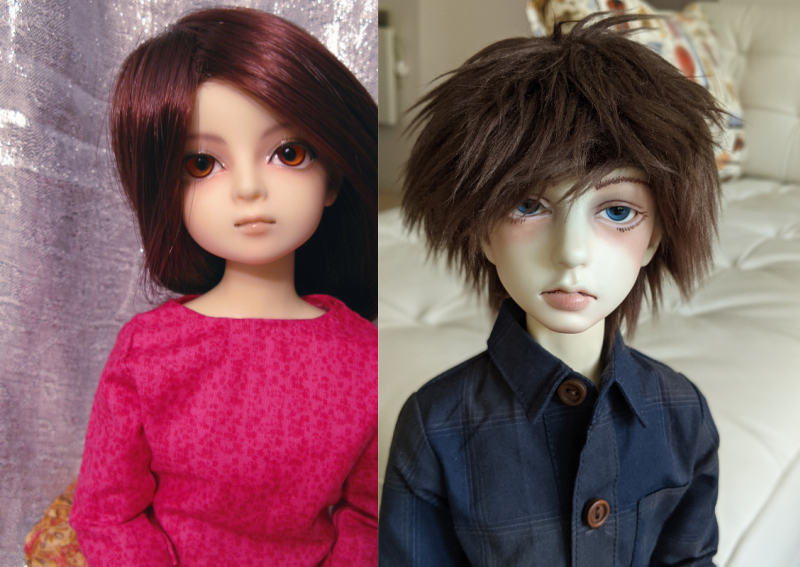 Left: An old photo of Alerion (Volks MSD F06) in orange Enchanted Doll eyes. - Right: Justinian in his former faceup and blue Dollflower eyes, before I wiped it off.

Faceup wiped and the resin primed with three layers of MSC.  The resin has yellowed (or lost the red tints) unevenly with age and exposure from the original muted pink fleshtone; in fact, all of Justinian's body parts not covered by clothing (hands, feet and face) have yellowed while the covered parts still kept the original colour.  But it's not displeasing at all and I can live with it! 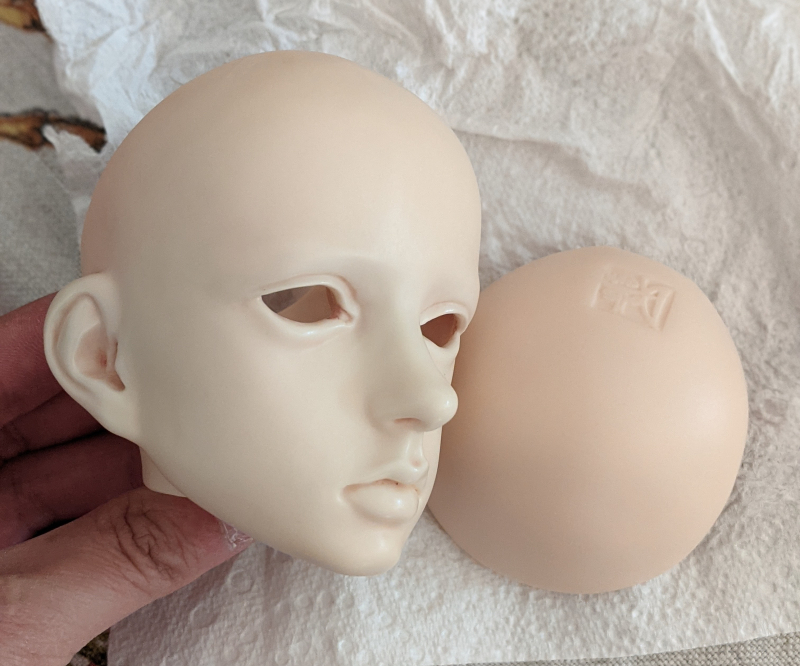 First layer of pastel was cool dark brown on eyelids; dark brown and warm dark pink on cheeks, chin and forehead and ears.  Sealed with one layer of MSC. 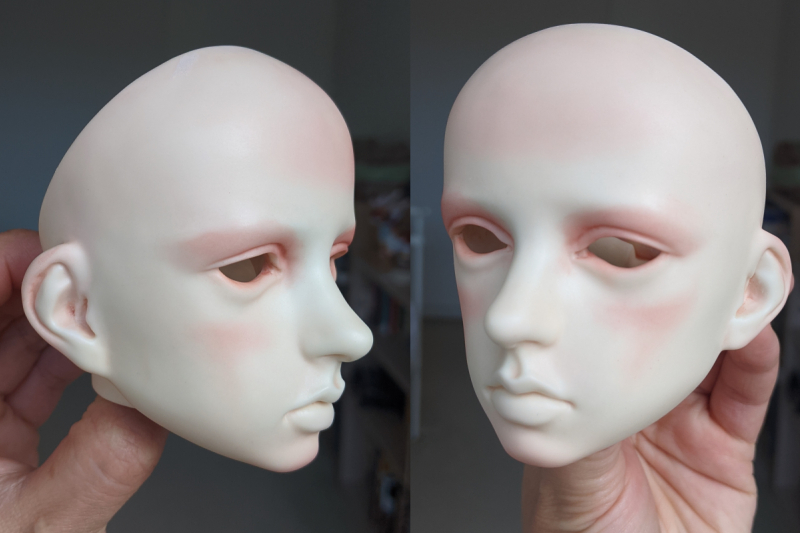 Then I darkened eyelids with same colour and drafted the eyebrows in dark brown, and sealed with one layer of MSC. 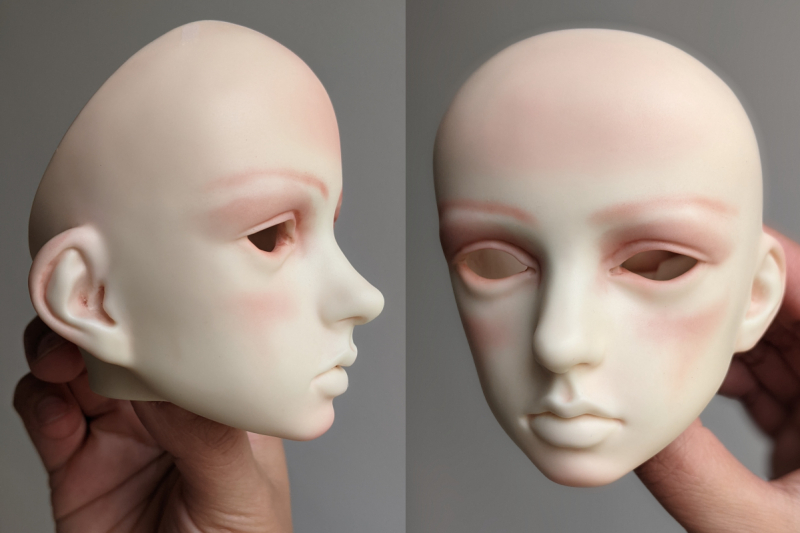 The last pastel step for now was painting the lips, and adding a touch more pigment everywhere.  Sealed with one layer of MSC. 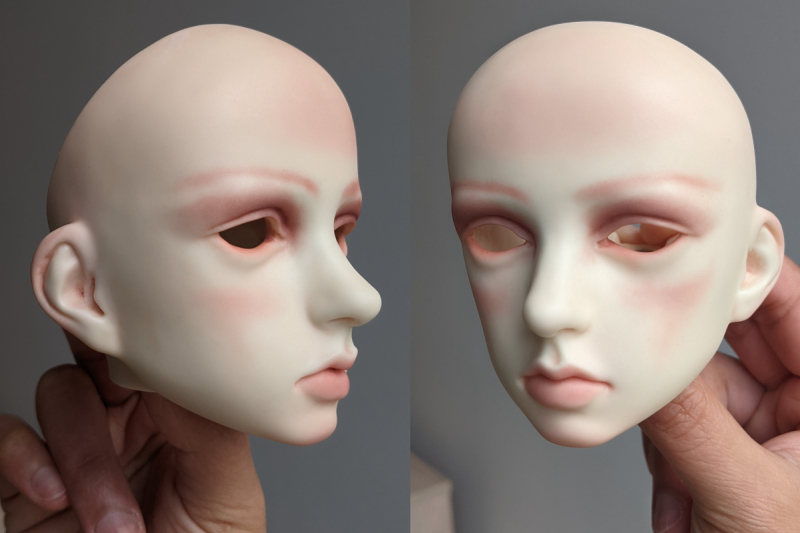 My faceup workspace for pastels. 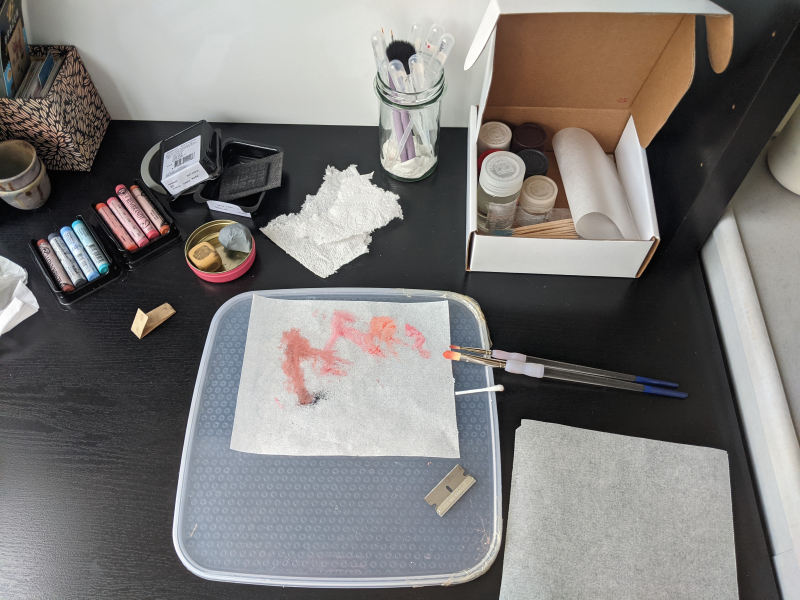 Switched over to acrylic paint.  (I quite like the process of pastel->paint->pastel to build colour in layers.)  In my previous faceup journal, I mentioned wanting to get a finer brush to paint those fine eyebrow and eyelash lines. Since I have two 20/0 brushes, I cut down the shorter one (on the left) to give it a finer tip. 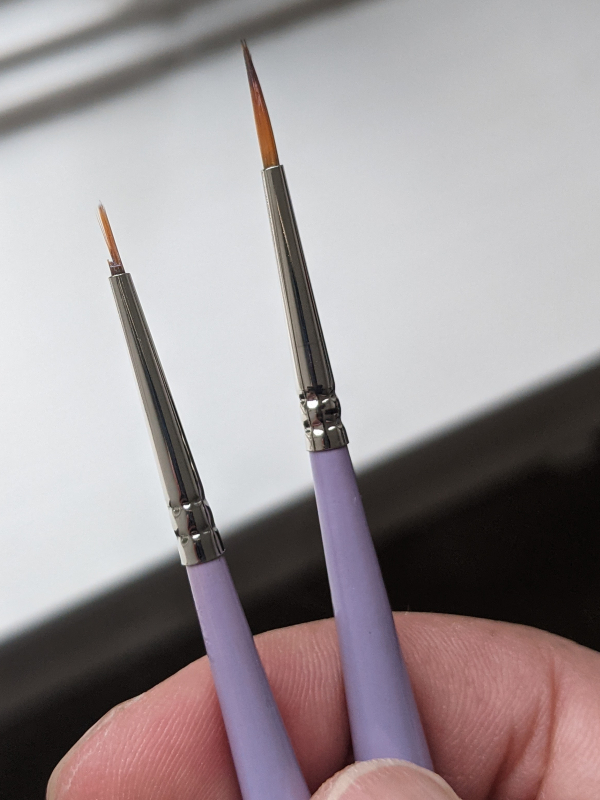 But here I discovered that my main challenge wasn't about brush size, but figuring out how to hold everything properly in my hands. I had a hell of a time figuring out how to hold the doll head and brush in a stable position without wobbling, but in a way that still allowed me to paint with free movement of wrist and arm.  A narrower brush doesn't help if I can't paint lines confidently!  (More on this later.)

I did eyebrows and lashes in a mixture of brown and grey paint with a touch of red.  I was so hung up on staying stable and not wobbling, that I wasn't able to focus on controlling line width. 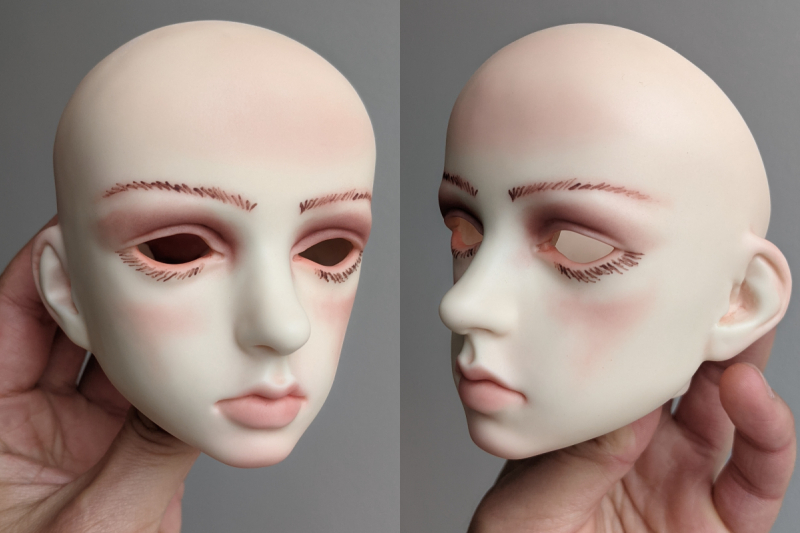 I used similar colours to do mouth corners and eyelid crease.  Then I swapped to my thicker but longer brush to paint a white lower rim for lower eyelid, and white mixed with a bit of red to make pink lip lines.  (Looking back now, I didn't lighten the red as much as for the previous faceup, and I think it's too vivid now.)  Finally, a bit of eyeliner to the upper lid, in grey mixed with dark brown.

I recently learned that longer "rigger" brushes provide more control and stability because of flex in the long bristles, while short bristle brushes are harder to control.  I will pick up a 100/0 brush or a long nail art brush in future.

Sealed with a layer of MSC.  I stopped at this point because the sun was setting.  I prefer to paint faceups under natural light so I can see colours more accurately.

My faceup workspace for painting. 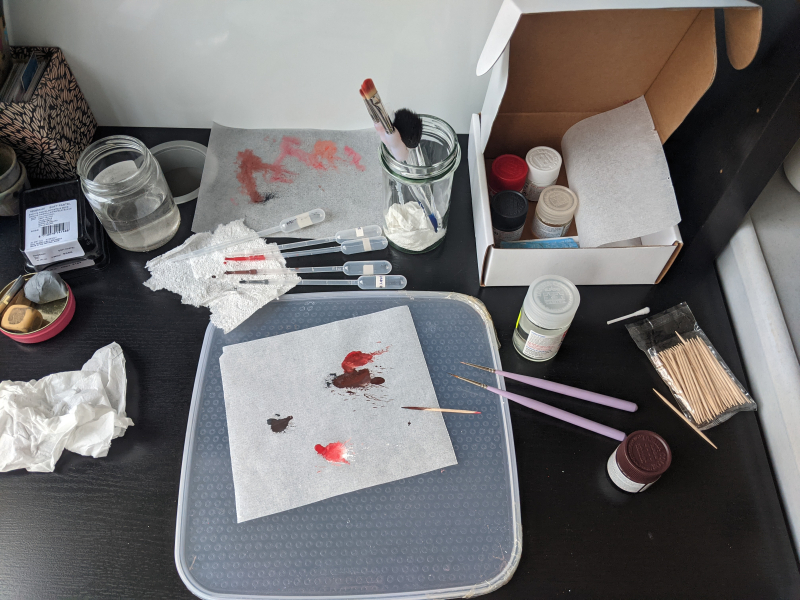 Next day, I did final touchups with pastel.  I forgot to take photos of this step, but I added some colour contrast to the warm blushing with blue-green mixed with a touch of grey, and darkened the lips.  Unfortunately, when I painted the lips yesterday, I failed to paint the lines long enough to match the sculpting.   I noticed this only after I'd sealed the faceup, and am a bit annoyed at this omission, but I don't want to change things anymore.

I'm much happier with this faceup in some respects, and not in others.  The blushing is much better, although I could continue making it more natural and subtle.  However, I should've taken more care to match this colour palette with Justinian's previous faceup, especially his lips which are a bit too vivid right now.  But it is what it is, and I don't want to over-edit it.  (Oh, for want of a spare doll head for practicing faceups...)

In search of the correct eyes

Now for the verdict... testing eye colours.  Blue Dollflower on the left, orange Enchanted Doll on the right. 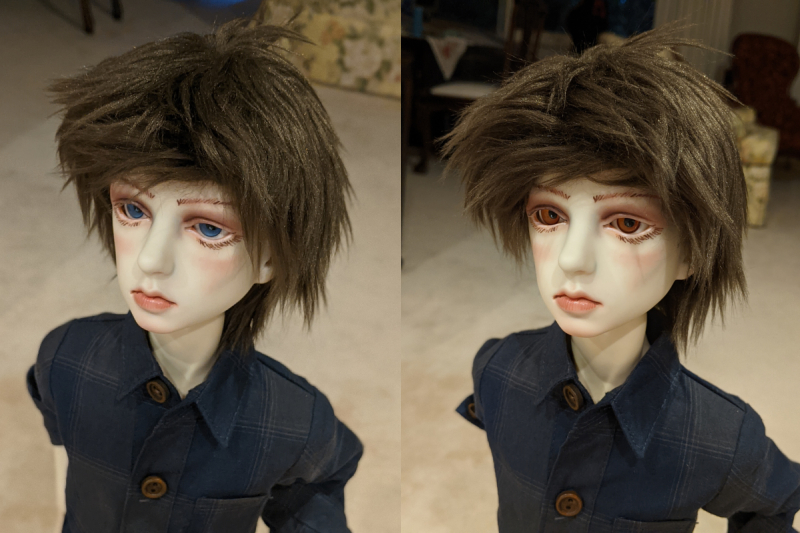 The faceup is better suited to the orange eyes, but Justinian still doesn't look right -- in fact, this felt tangibly wrong.  Somehow he has tipped just over into uncanny valley, and I don't get a good feeling from him anymore.  Orange isn't a natural eye colour and can definitely look sinister, but with the right faceup and hair colours they can look inviting.  My Volks MSD girl looked wonderful in them, as did a whole lot of photos I found of BJDs with orange or yellow eyes.

I stewed over this for a couple days, even did a photoshoot to see if I could get used to it... but I couldn't shake the sense of wrongness.  I was not keen on redoing Justinian's faceup again, or changing his hair colour, so the orange eyes had to go.  Back to blue eyes, or try a different colour?

Turns out I had a pair of golden eyes from Enchanted Doll in my eye stash - maybe they would work?  That's when I remembered that I'd made a moodboard for the kinds of eyes that suited my vision of Justinian.  All the Birds of Fable dolls are themed after birds, and his theme is falcons and hawks.  But I had some owls on the moodboard as well, and I think my inner vision got sidetracked by their orange eyes instead of the hawks' yellow ones. 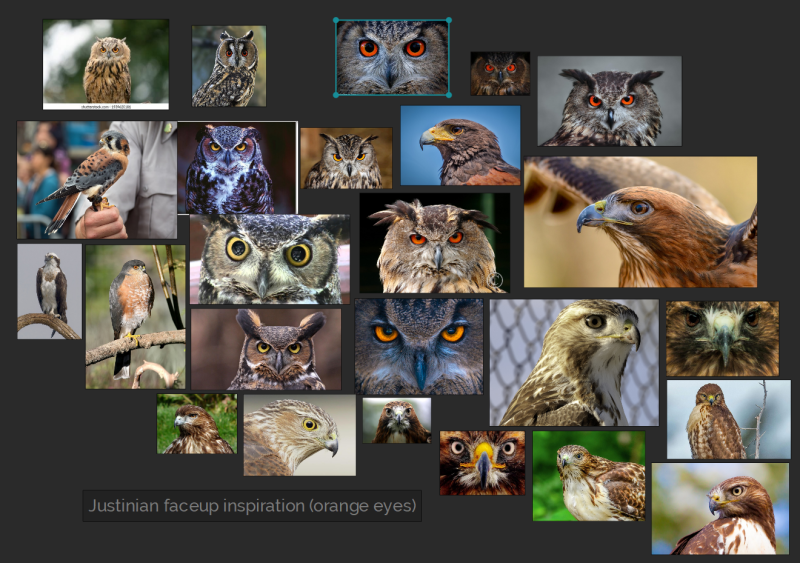 My PureRef moodboard with photos of raptors and owls.  Pictures are sourced from general searches.

I think the golden Enchanted Doll eyes look substantially better with Justinian's faceup!  Even better, whatever sense of wrongness I felt with the orange eyes immediately disappeared.  I don't know how to describe it, but the orange eyes seemed to have created a tension (or spiritual atmosphere, or "vibe") that just didn't sit well with this doll, and I couldn't shake it no matter how hard I tried.  But that tension vanished the moment I changed his eyes.

I think Justinian looks more settled now in golden eyes, and I'm also much more settled about it in my mind and gut.  So he'll keep them.  And while I can nitpick at his faceup, I did my best work and like it much more than the previous one, so I'll put a lid on my inner critic and leave it be.  I already have plans to commission new eyes for all my dolls, so I might tweak the precise colours a bit in future.

(1)
An experienced faceup artist was kind enough to demonstrate, on video to me, how she holds heads in a stable posture to paint confident and accurate lines.  Namely, with doll head in left hand and brush in right hand:

I hadn't noticed this before, but so far I've been holding both doll head and brush up in the air, with elbows on table as my anchor point -- and this is definitely not a stable posture.  Amazing how these little details make a difference.  I'll try holding everything different next time.  Thanks Iza, for that generous demonstration!

(2)
I made a moodboard of dolls in orange/red/yellow eyes to analyze what made them look good, and had a little discussion with another doll owner about this.  Some tips:

(3)
Finally, it's so interesting how a doll sculpt can dictate its own styling.  When I first got into the BJD hobby (in 2009), I tried to shoehorn a character concept onto a doll sculpt (ie. "shelling a character"), and it was an exercise in frustration.  Nowadays, I cooperate more with the doll sculpt by "suggesting" appearances: since they're suggestions not requirements, I can hold those plans loosely and have fun discovering what sticks and looks good on them.

I believe in trusting gut feelings when creating and developing characters for stories. Sometimes a scene or dialogue feels wrong because my subconscious knows that I'm writing something OOC for the character(s).  All along I'd never been able to get Justinian to wear orange eyes, but perhaps the kind of character developing out of this doll is one who doesn't have orange eyes.  So perhaps that tension I felt was my gut telling me that orange eyes didn't reflect the kind of bird that I created Justinian's character to be.

So it's another reminder that I should relax, hold my preconceived plans lightly, and go with whatever looks and feels good on my dolls.  Cooperating with the doll to develop a character: that's what makes the BJD hobby fun! 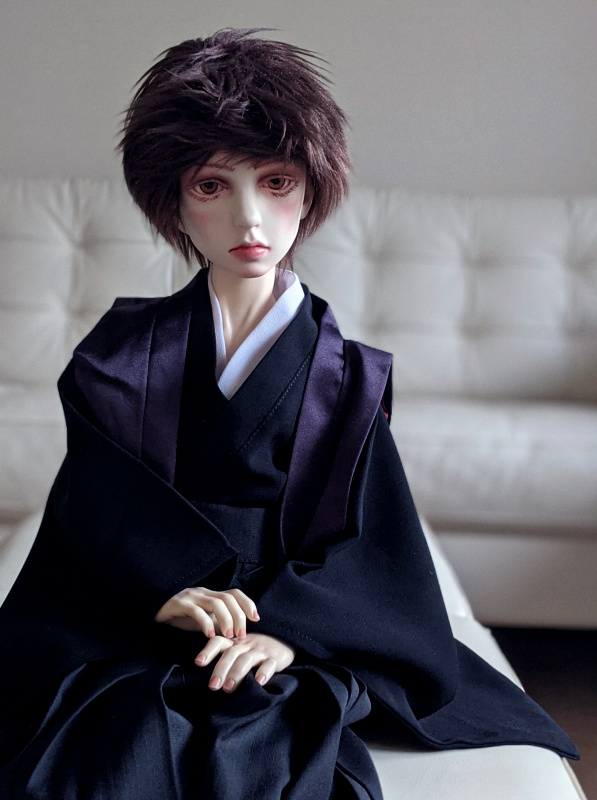