Bring home the two dolls on my wishlist (Kanadoll Mars & Vings Seira). One is currently in slow progress (preordered the body, posted WTB for the head), for the other I'm waiting (hoping) for the artisan to open preorders. That's all the new resin I've planned - but of course, who knows if this plan will hold...

TIMELINE: entire year.  If I don't find Mars by the end of January - start looking at Xianyu, Mandarake, Korean secondhand

No more new dolls in 2023 apart from Seira.  I expect these 3.5 dolls to arrive spaced out throughout the year, so I have new box openings to look forward to, and time to integrate everyone into the crew and complete their appearances.

ENDGAME: Be happy and thankful for the dolls I already have, and stop feeding the green-eyed devil and its wandering gaze.

2a. Continue doing photoshoots and stories of my current crew. This has been progressing magnificently since I came back from hiatus, and I still have tons of stories to tell with my dolls.

TIMELINE: try to take at least a small photoshoot each week.

2b. Borrowed a Nikon DSLR from parent with a macro lens.  I don't have it forever so I want to learn how to use it.

TIMELINE: do some reading and do at least one accurate photoshoot before end of Jan 2023

ENDGAME: Can't have too many photos of attractive dollies.  And learn how to use a DSLR before I have to return it.

Keep practicing and improving faceups. I started learning faceups in Nov last year, and it was so much fun that I want to keep going.

ENDGAME: Git gud enough to maybe start offering faceups to my local BJD community.  And good enough to do Syr justice.  Hana has stopped doing faceups for many years and doesn't seem likely to return, and I'm sure I'll have to refresh Syr's face one day.

Learn how to sew clothes. I'm hoping to start this by the end of this year (2022), and we'll see how far I progress. I'm not sure how much I'll get into sewing, but at least I want to make simple casuals like shirt and pants, and kimono.

Lastly... create a "flight studio". This is an ambitious project, but I have a dream to take photoshoots of my dolls in action and fighting poses, especially of the flying/wuxia kind. I've already tested a proof-of-concept that works, so I want to push the concept further. I don't know how far I'll get because this involves a bunch of planning, not to mention building stuff. We'll see! If anything, it'll push me to work on my other doll skills!

TIMELINE: by end February - started installing poles in cupboard.  OR if that plan falls through: get stands/clamps to do more photoshoots.

ENDGAME: I want my dolls to fly. 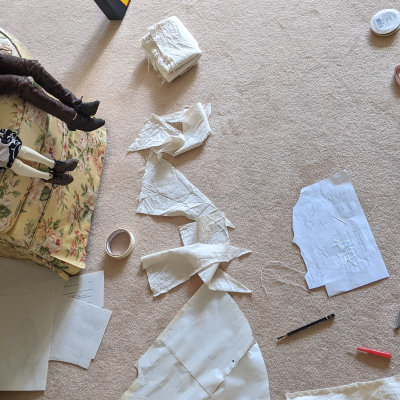 In which these dolls compel me to learn useful life skills so I can make stuff for them.

Lately I've been chatting with hat about BJDs.  Hat and a friend made a huge questionnaire for doll lovers, so here are my answers.  This was fun to fill out!